The adventures of Ash

My cat, Ash, suddenly passed away this weekend. This post is in his memory. 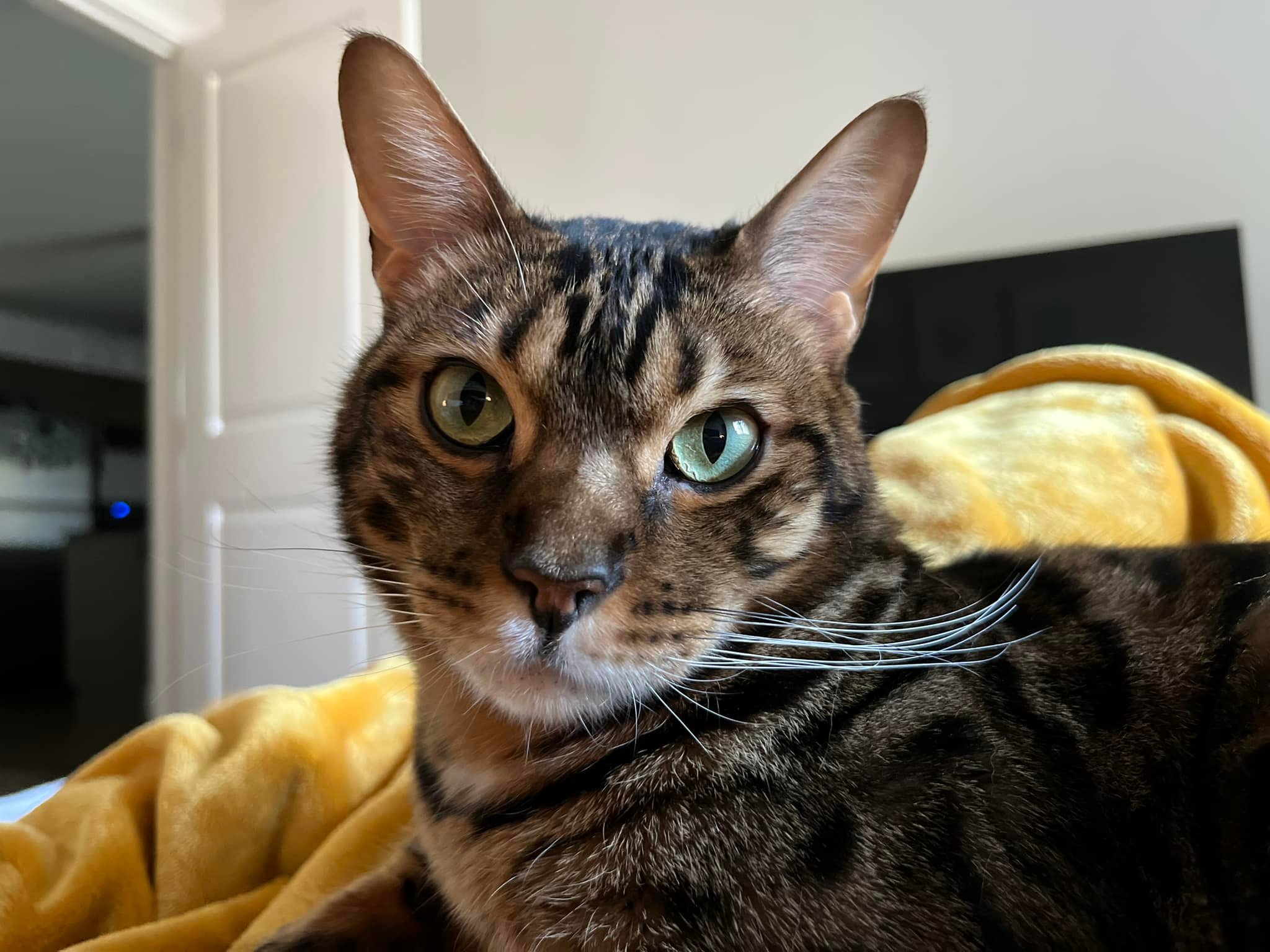 On the morning of July 31st, 2022 our cat, Ash, also lovingly known as Bubba, passed away suddenly and without reason while we were on vacation.

The night before he passed, our cat-sitter noticed he was a bit off and lethargic. That said, he was still moving around and purring when picked up. He had acted like this in the past due to crystals in his urine but had always bounced back after a day or two. We’d talked to vets about the issue previously and they’d said we had a strong young cat, and that as long as symptoms were only for a day or two he’d be fine. Regardless, we booked a vet appointment for the next morning to get him checked out once we heard that he was acting off.

The following day, when our sitter arrived to check on our cats, they found him cuddled up in one of his many beds and he wouldn’t wake up. He was rushed to the vet, who determined he had passed a few hours before with no apparent cause. He was only 4. Our drive home was filled with a type of pain I really hadn’t felt up until then. 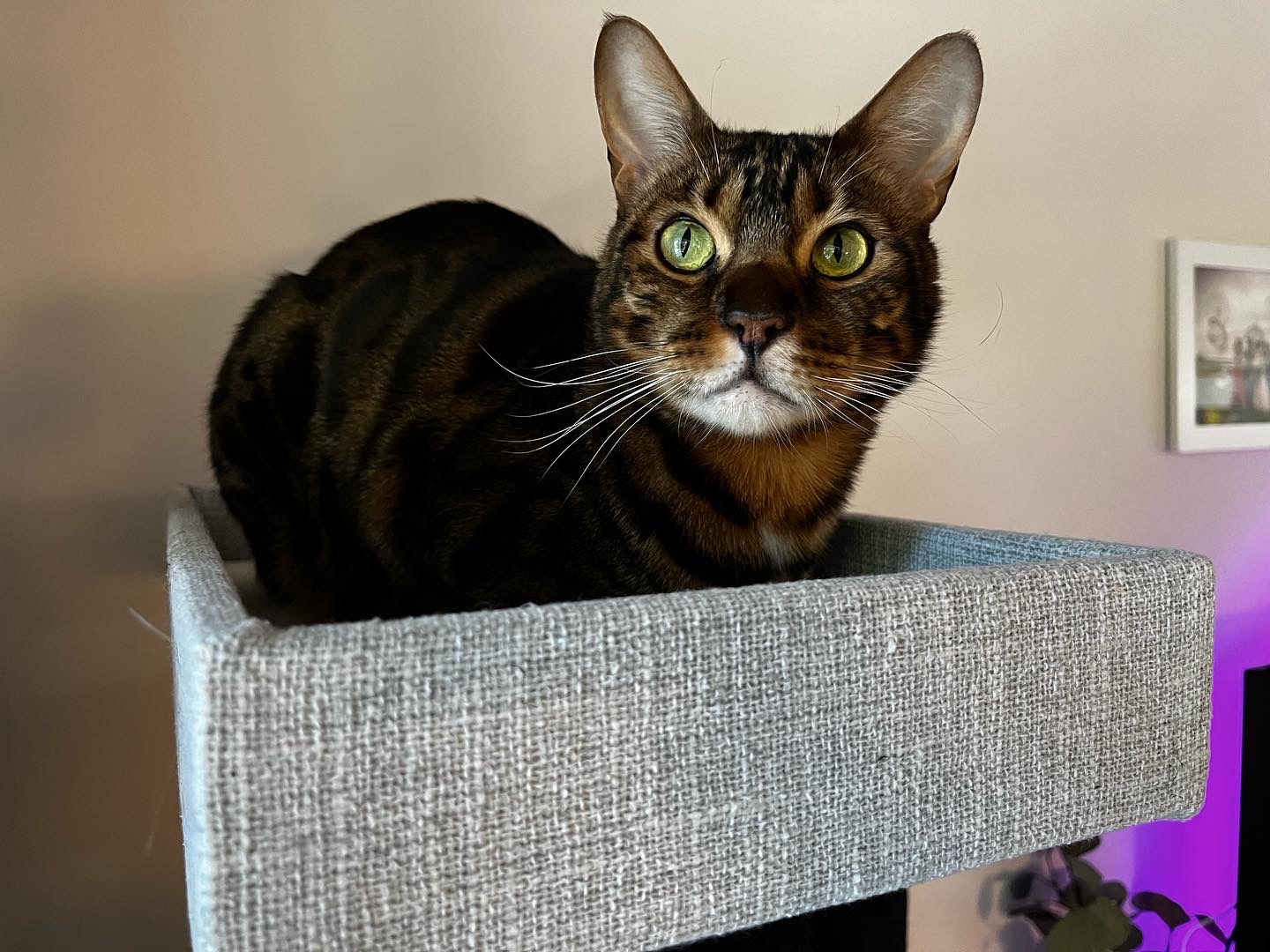 I’m absolutely devasted. We left home on Friday morning with two happy, energetic, loving cats at home and came home to a house with one. I feel like I’ve been hit by a truck, my head hurts, I’ve been crying on and off since finding out, and I can’t come to terms with the fact that he’s gone. I’ve never lost a pet so young, or so suddenly, and it hurts.

A big part of why I wanted to write this was to document some of my favourite memories of him and to hopefully aid the grieving process. I’m sad, this will probably be rambly, but I wanted to write something up for him; feel free to skip the post if you’re more interested in my programming/tech stuff.

Now that Ash is gone, I’ve been noticing him throughout the house in ways I never would have previously:

Ash loved quality time, and would often come and snuggle with us. He would either come into bed and cuddle up beside you (occasionally on top of you) or hop on the couch beside you and happily receive some pets. This was especially true in the morning.

Some of my best nights of sleep in hard times were brought on by him snuggling up and purring beside me and then waking me up the same way. Another favourite of mine was when he would sit behind me in my office chair, cuddle up against my back, and purr himself to sleep. When I’d leave, he’d take up the rest of the seat and sleep there all night if I let him. 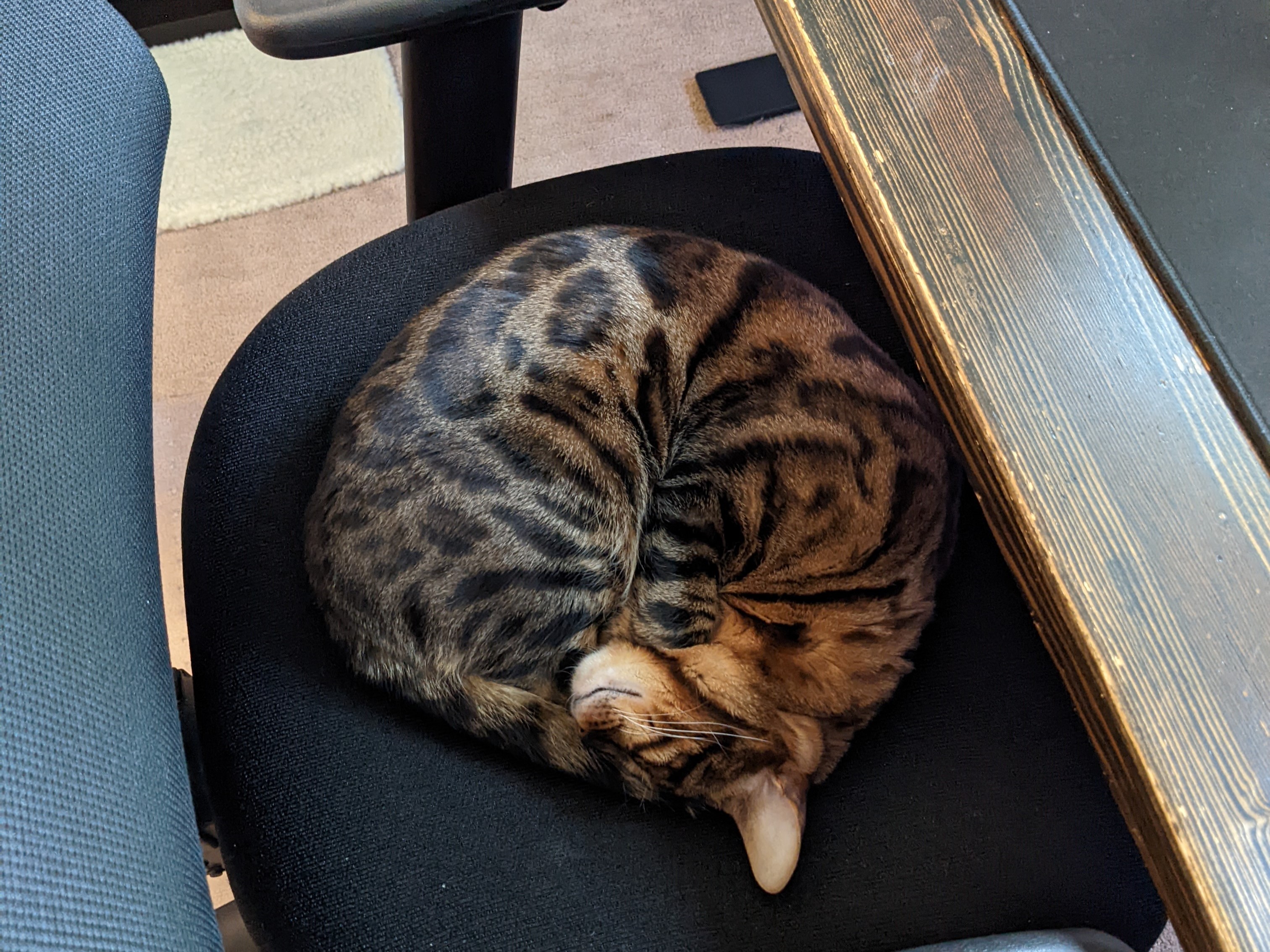 Ash was a very affectionate cat. He helped Kiya and me through some great and not-so-great times. He was always there for comfort and usually offered it up before we went to him for it.

This morning I kept expecting him to hop up on the bed and snuggle up, but that never came which lead to the painful realization that it won’t happen anymore.

Ash was well loved and well documented. Google photos says that I have around 260 photos of him, not including the uncounted hundreds more in the archive on my NAS + Snapchat memories + photos the google AI missed in tagging + photos on Kiya’s phone. I’ve included a few of my favourite recent pictures in this post. 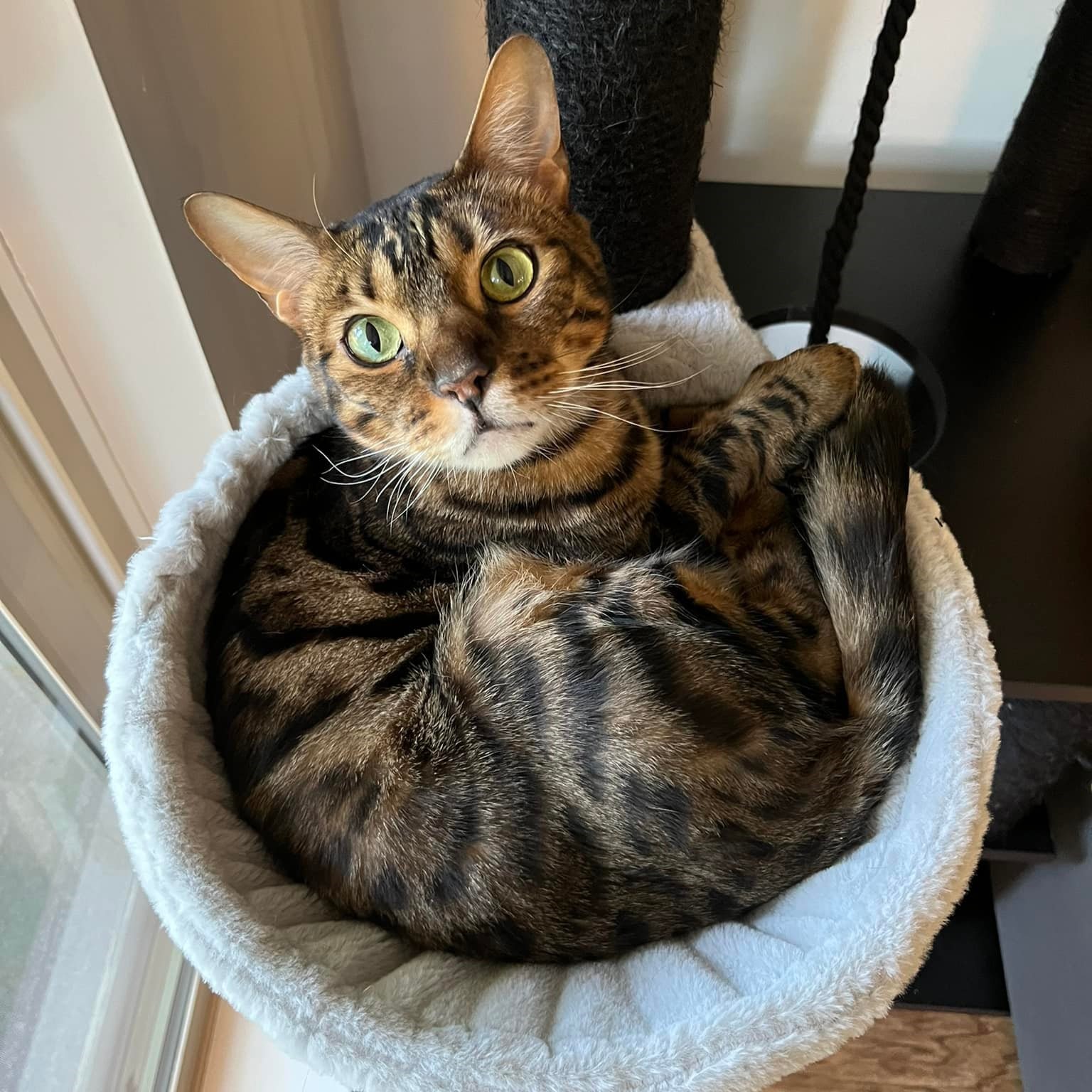 While these are really hard to look at now, I’m sure in a few years they’ll make my heart fly.

Ash was only 4, and easily could have lived until I was 40 given an average Bengal’s life span. There were a ton of things that I wish we could have done together, but here are a few I’ve been struggling with since he passed: 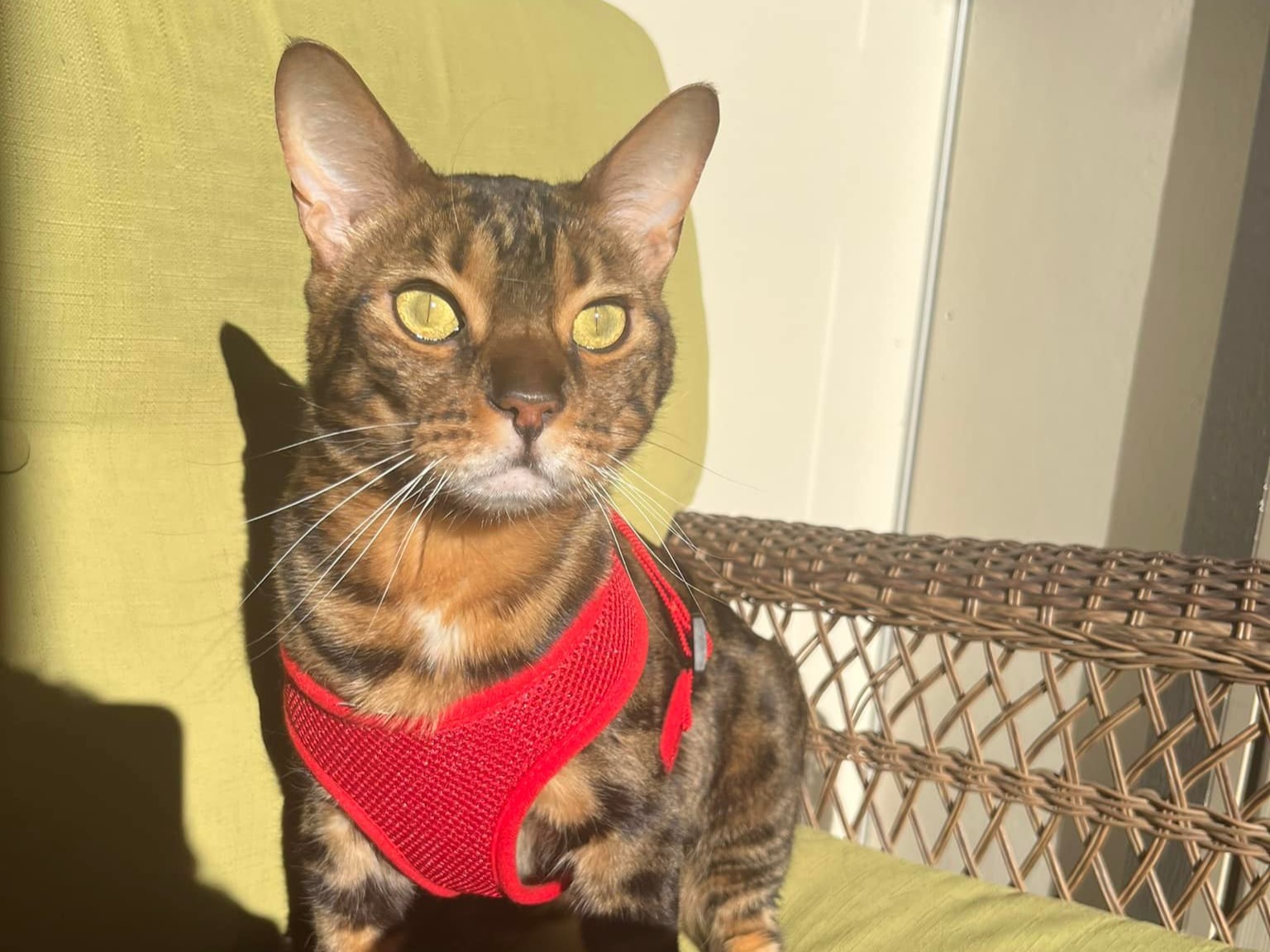 Ash also had a bit of a mischievous streak when he wanted more attention than he was getting. He loved to hop on tables, drink water out of our cups, try to stand on the TV, and just generally be places he shouldn’t be. This was annoying at the time, but I can only see it as endearing looking back. I wish I could pick him up off the table, hold him like a baby, playfully scold him, and then play fetch with him again.

For this reason, Kiya and I had a bit of an inside joke that we should write a children’s book called “The adventures of Ash” that followed his mischievous journey through life and had some sort of underlying message about unconditional love despite little screw ups. Now that he’s gone, I think we might try and find a way to make that a possibility even if it’s just for us. At the very least we’re going to put together a photo book with all the great memories we have of him growing up. We’ve talked about getting a tattoo of his paw print in his memory as well.

Besides the physical stuff we’re doing to remember him, Ash taught me so much about how fulfilling life can be. I know people tend to think of pets as “just pets”, but he was a massive part of my heart and our family.

On the last night before leaving for vacation, he came and cuddled up, purred, and slept with me solid through the night. You can never tell what cats know but I can’t help but wonder if he knew we were leaving, and that he didn’t have much time left.

He will always be Kiya and I’s Bubba and best friend. If there’s something after, I hope he’s out there off chasing squirrels and eating butter. 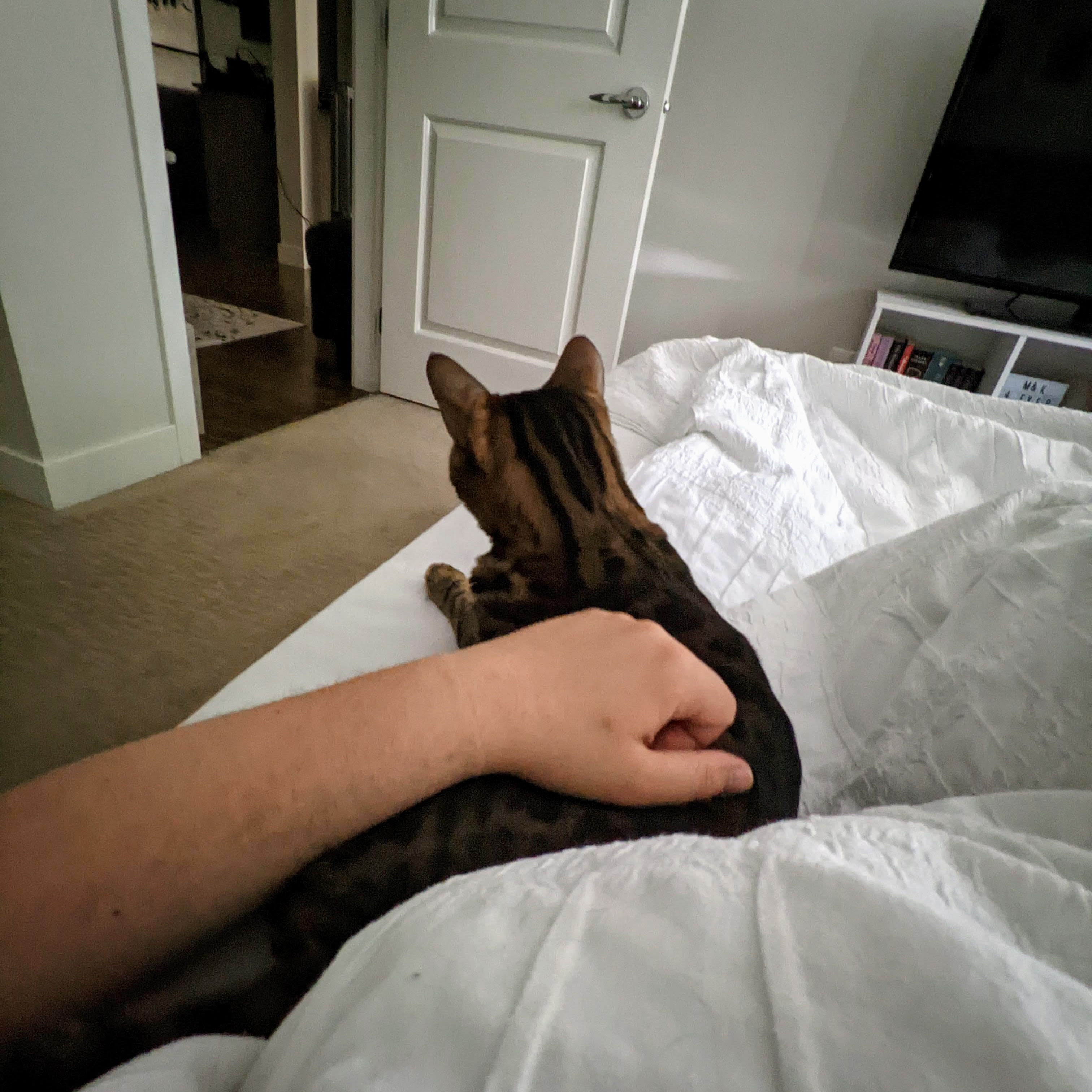